Highlight of the year is Ballyconneely pony show which is in July. 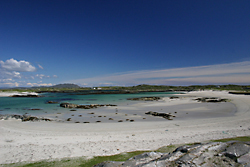 The village area known as Ballyconneely is located five miles south of Clifden on the R341 coastal road to Roundstone. It is based on the Ballyconneely peninsula that juts out into the Atlantic  which is the most westerly point of Connemara. The rocky promontories and wild coast are home to many species of seabird, seals and other marine creatures. Often sightings of dolphins and  whales can be seen. In midsummer  the corncrake can be heard.

The main beaches in the Ballyconneely area are listed on our beach map click here, the most well know being the Coral Strand just on the Clifden side of the village, but there are many more top quality beaches close by. Dunloughan beach near Ballyconneely is one of the best known surfing spots in Connemara. Although conditions are not as gnarly during the summer months, from September to May you are guaranteed regular big swells, thanks to large storms far out in the Atlantic. There are several beaches along this shore that are suitable for surfing, and it is best to enquire locally to find out more, Conn O Mara shop in Clifden is a good place to enquire, and some surfers are to be found in Mullarkys Bar in Clifden.   The Ballyconneely lakes and beaches are also of great interest to the angler, with brown trout in the lakes and there are some good shore angling marks where a great variety of species can be caught. A favourite fishing spot is Bunowen Pier, where surprisingly large conger lurk in the stonework at the end of the pier, best fished for in the evenings.

also a filling station. Keoghs bar is a great spot for a pint and a bite to eat. There is also a church in the village with Sunday and evening masses.
The golfer is well served by the Connemara Golf course which is a 27 hole links course on the southwestern side of the peninsula. This is a beautiful course formed from the natural sand dunes and grassland on the Slyne Head peninsula with a very well run clubhouse and reasonable green fees.
Ballyconneely has many historical associations: In 1854, the first salmon ranching operation in the British Isles was carried out on the Dohulla Fishery. In 1919, the first transatlantic flight by Alcock and Brown ended two miles away from Ballyconneely in Derrygimla Bog, where they misjudged the nature of the bog and crash landed. The crash landing was near the Marconi Telegraph Station, built in 1905, which was used to send the first transatlantic wireless message, to Cape Breton in Nova Scotia, in 1907. There is a very interesting walk around the remains of the wireless station that has been set up with interpretive signs and interactive information. A visit to this is an afternoon well spent. Ballyconneely is also a great location for exploring the Wild Atlantic Way

The famous Connemara pony is bred in the Ballyconneely area and legend has it that the breed originated when Arabian horses came ashore from a Spanish Shipwreck near Slyne Head and inter-bred with the small native pony. The Connemara is famous for being hardy and sure-footed, and no surprise the breed evolved on the rocky coast of western Ireland, where it had to develop an ability to move quickly across rough terrain. The sometimes harsh Irish weather and unforgiving lan 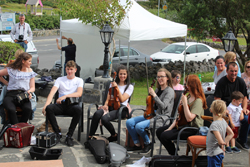 dscape helped develop a breed that is resilient and adaptable, and you will see them everywhere in Ballyconneely. The Ballyconneely Pony Show is held in July, and is a precursor to the Clifden Pony show, and is a great day out for the family.
Slyne Head is a rocky outcrop that is an extension of the Ballyconneely peninsula and has a well known lighthouse the light of which can be seen from more than twenty miles away alerting ships to the dangers of this rocky promontory, there are some lovely walks on the south side of the peninsula towards the islands at the end, passing St Caillins well which is a holy well visited by the local fishermen on the 13th November. Many of the local boats carry a small vial of water from this well as a talisman for safety at sea. If you continue on along this shore you will see many seabirds, and often there is a seal or two basking in the sun on top of a rock.

A new event in the area is the Connemara Oyster Festival which takes place in July, featuring locally produced seafood and other produce, displayed over a weekend event. If you have an interest in fine locally produced food there is a very well kno

wn smoked fish producer very close to Bunowen Pier. Graham Roberts and his team Connemara Smokehouse produces a mouthwatering variety of smoked locally caught fish and seafood which has won awards. You can arrange a visit for a tour of the smokehouse to see how the fish is prepared.
Just down the road from Ballyconneely is Calla and beyond that Dolan between these two places is an amazing stretch of coastline with sand dunes, beaches and drifting sands, a very striking and interesting landscape. Renting a cottage in Ballyconneely is a great choice for your holiday in Connemara.

Black Bird Cottage in a traditional Irish stone cottage close to many sandy beaches and The Connemara Golf course.

Murlach Lodge is in the centre of Ballyconneely. Keoghs pub is just up the road and beaches are nearby. Perfect Location for visit to…

Murlach Lodge is in the centre of Ballyconneely. Keoghs pub is just up the road and beaches are nearby. Perfect Location for visit to…

This is a stunning cottage in a spectacular location with far reaching views over Mannin Bay.