Highlights of the year are the Pony Racing on Omey Strand and the Claddaghduff Pony Show.

Claddaghduff is approximately 8 miles from Clifden on the N59 Westport road. Continue on this road and 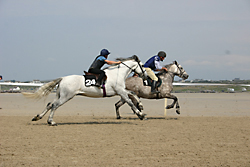 take the second left turn signposted Claddaghduff. Streamstown bay will be on your left and views to distance Islands ahead of you.

The village as such covers a large area along the coast road taking advantage of the stunning views over Omey , Cruagh and High Islands and the Atlantic Ocean towards the south. The Strand Bar, or Sweeneys as it is known locally is a nice pub near the Church and it has a  shop and Post Office.

Omey Island is attached to the mainland by a large beach which is exposed as the tide goes out and it is here that the annual pony races are held. A stroll across the island will reveal the ruins of Teampal Faichin, 7th Century Saint Fechins Church which is the most obvious of the many ancient sites on the Island which has been inhabited since pre-christian times, and has been the subject of many archaeological digs. This place has always had appeal for writers and artists, notably the poet Richard Murphy who lived in the area for some years and for whom local lore and landscape/seascape inspired his work. Novelist John McGahern also resided here taking inspiration from the wonderful surroundings. The last full time resident of Omey was a man called Pascal Whelan who was a stunt man, actor and long time friend of Peter O’Toole. 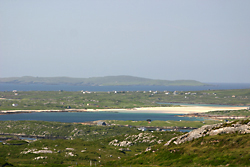 Here and in nearby Cleggan you can find deep sea angling, lake fishing, boat trips to Inishturk and Inishbofin, pony trekking, and dive sites, and a big loop of the Wild Atlantic Way curves through it. There are lots of beaches on the coast here. Omey is an ideal place for sand yachts, kite flying, safe swimming and shell fish picking. Aughrus pier has a few moorings ideal for people bringing a small boat whilst on holiday. Aughrusbeg lake holds some of the largest brown trout in the area. The beginner can try Coorhoor lake which is full of smaller fish but they are easier to catch. There are many  shore marks  for the adventurous sea angler. For the more laid back angler Aughrus pier is an easy stroll!

The House: This is a beautiful Traditional thatched cottage… More Details

This Charming and traditional cottage is only a short… More Details