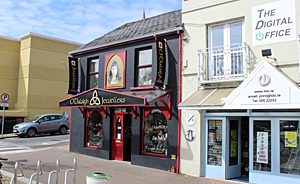 Clifden is regarded as the capital of Connemara . It is a pretty town that nestles between the Twelve Bens mountain range and the Atlantic Ocean at the top of Clifden Bay. Clifden is a very lively town and has a busy calendar, which includes the Clifden Pony Show, a world event in the Connemara Pony Breeders year, a Regatta held by its Sailing Club, a Saint Patricks day parade and an amazing end of season Arts Festival which is ten days of cultural events culminating in a parade through the town and fireworks.  There are numerous hotels, restaurants pubs and shops. Whatever your taste in holiday, be it walking, sailing, diving, cycling, bird watching, fishing in sea, lake and river, or simply relaxing in front of a cosy open fire, Clifden is an ideal spot to base a holiday. Families will enjoy visiting the many sandy beaches in the area and swimming in the crystal clear sea. It is 60 miles from Galway on the N59 road and a capital town of Wild Atlantic Way. We have some great holiday Cottages in Clifden so browse the properties we have listed.

Clifden has many restaurants to suit every taste and budget. It is easy to pass the time wandering in and out of the shops and having lunch or a coffee in one of the many popular eateries. There are a number of art galleries in Clfden, and there are more shops and boutiques in the Station House Complex near the centre of the town. There is also a cinema/theatre and a museum here too. The Station House Museum is located on the site of the old Clifden Railway Station and provides visitors with a history of Clifden and its founder John D’Arcy, the Connemara Pony, the Galway to Clifden railway line, Millars Mill and Alcock and Brown (first transatlantic flight). There is also a photographic exhibition on the Marconi wireless station

What is there to do?

Enjoy some music and craic nightly in one of the towns many fine pubs. Make sure to call into Lowrys bar which have won Best Traditional Bar in Ireland a number of times. There are any number of jewelers, boutiques and craft shops for you to 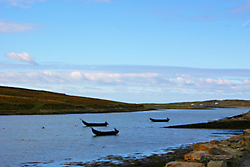 browse through. During the summer months, you might like to do some water sports at the Clifden Boat Club. Or get in touch with Real Adventures who run a number of activities close to Clifden. Hire some bikes from Clifden Bike Shop & tackle the Sky road – the have bikes to suit all ages.
For the fisherman the Owenglen River and numerous lakes in the Clifden area hold salmon and sea trout. A number of sea angling charter boats work from Clifden harbour. They provide some of the best and most reliable sea angling in Europe. Or try some Fly fishing at Ballynahinch Castle just out the road. This is only a small amount of what there actually is to do during your time in Clifden

The founder of the town, and owner of the land the the town was built on, built his home Clifden Castle a mile outside the town on the Sky road, and then proceeded to establish Clifden as a Market Town. The two major streets, Main and Market, meet at the square and seem to be built around the original streets of Market Hill, if you take a detour in your exploration of the town and take a left in the middle of Main Street you can walk up Market Hill and see some of the remains of the original shops and houses.
One of the most attractive features of Clifden is its colourful shop fronts, when the town was being built one of the requirements D’Arcy placed on his tenants was that the shops must be whitewashed every spring. In keeping with the original intent the citizens of Clifden have gone a step further and the bright pinks, yellows and greens look very attractive in the morning sunlight.
The twin spires of Clifdens Catholic and Protestant Churches dominate the landscape. From any viewpoint they seem to dominate the town and they are an integral part of the history of Clifden.
It is a little known fact that, long before Dublin was lighting its streets with electricity, Clifden was generating its own power with a power station located just above the waterfall at the Ballyconneely Road supplying the town and houses with 220 volt electricity. Millars Mill, a major employer for many years operated just above the powerhouse at the base of the old gaol. The power station supplied electricity to the mill for the looms which made tweed. The mill closed some time ago, but Millars Tweeds still have a very interesting shop on Main street.

Clifden Community Arts Council was founded in 1980 and since that time it has organised Arts Week held annually the last week of September. This festival was first intended to bring experiences of all the Arts to the students attending the community school. Since its beginning as a two day event it has grown to fill a full ten days with music, poetry drama and the visual arts.

Just a short drive from the town on the Ballyconneely Road, is the memorial built to honour the intrepid pilots form the United States who landed their plane in the bog on the completion of their flight across the Atlantic. The spot is now been made very accessible by the creation of the Derrygimlagh bog walk which also has guidance and  interpretive information about the Marconi Wireless Station which was involved in transmitting radio signals across the Atlantic in the early days of radio. This is a great afternoon walk. Other walks around Clifden would include the Sky Road, and a stroll down the Beach Road to the Clifden Boat Club for a coffee or a meal. There are some really nice holiday cottages in Clifden so take a look at the list!

Studio Apartment: This apartment is in a great location right in the heart Clifden town – the capital of Connemara. There are numerous restaurants, cafes…

This cosy cottage is located on a quiet road, 3-minute walk from Eyrephort beach on the Sky Road possibly one of the most scenic routes…

Situated under the Twelve bens mountain range, Benview stone cottage is the perfect location to base yourself to take in all of the best of…

A well positioned cottage located on the Sky Road, part of the spectacular Wild Atlantic Way.