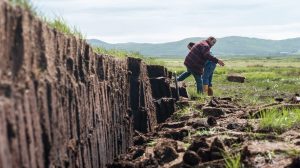 Up until quite recently dried peat, known locally as turf, supplied a great deal of the domestic heating in Connemara. Every year the weather would be watched carefully with and any sign of a dry spell the work on the bog would start, and rows of drying turf start to appear in the bogs.

Peat is created in wetlands that have a blanket of sphagnum moss growing on them. The living layer on which the moss grows is only a couple of centimetres thick, and when the moss dies it starts to decay in the water beneath, but as the water has no oxygen in it the moss does not fully decay, and leaves a fibrous black organic material that becomes more compact as it goes deeper.

The right to cut turf, or turbary rights are often part of the deeds of a dwelling, a good bog is a matter of pride, and everyone will say that the turf from their bog makes the finest fire.

The cutting of turf starts with removing the “scraw” or layer of heather and grass that covers the bog. When this is cleared away a spade with an “L” shaped blade is used to cut 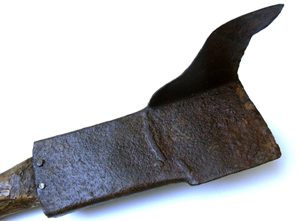 the peat into square “sods” about eighteen inches long. These are then thrown out to dry on the top of the bog, often being carted away with a barrow to make more room.

The turf, once it is laid out is left to dry for a couple of weeks and is then stacked or “footed” upright in stacks of ten or twelve sods. This is tough work and all the family are involved, and often neighbours help each other out.

Depending on the weather these stacks are be left to dry until the turf is properly dry or “seasoned”, then the ordeal of bringing the turf home starts. The bog is soft and often difficult to bring a tractor in, so the turf must often be carried in bags to the nearest track, and a donkey with “cleaves” as the wicker panniers are known, is  often still used to do this. The turf is all stacked on the side of the track and then brought home in a tractor trailer with high sides.

The last job with the turf is to make a pile at the side of the house, this is known as “skibbling” and it takes a lot of skill to make a stack that doesn’t fall down. It is then thatched, traditionally with rushes but mostly with sacking nowadays, held down with scrap fishing net and weighted with stones to form the characteristic long rounded stacks.

Cutting turf still takes place, although a lot of bogland has been closed to cutting in order to conserve the blanket bogland and its unique ecosystem. You will however still get the haunting smell of a good turf fire as you travel around Connemara, and see the stacks and piles of turf being worked on in the early summer

All things to do with the turf and the bogland are celebrated in Connemara Bog Week, which takes place in the Letterfrack area between 26th May and 3rd of June Click Here to Read more 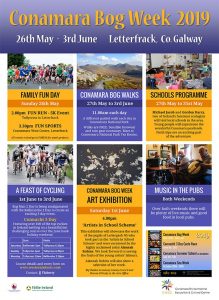 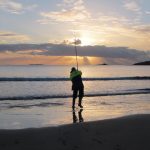